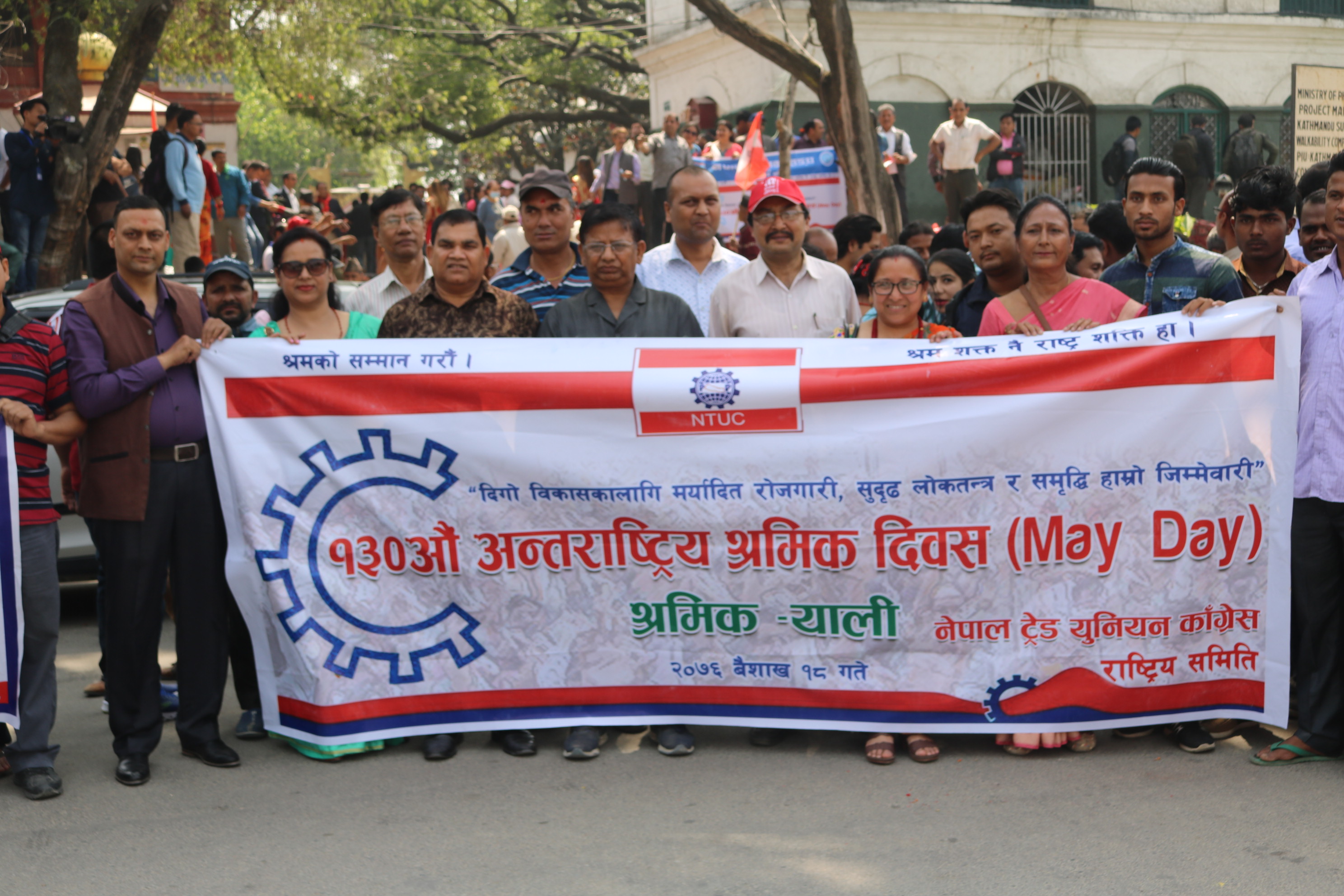 The rally started from Bhadrakali at 10:00 am and concluded in the congress at Balmiki Ground, Bhrikuti Mandap. More than 2000 workers from service, production and informal sectors marched in the rally.

The program started by the welcome song from Prem Prakash Oli. He sang workers song. Also, President of NTUC Kathmandu district Bro. Devi Lamsal gave the welcome speech to the labours. The national anthem took the preceding which remembered the evolution of labour movement from 2003 B.S.

Likewise, President of Nepal Home Workers Union (NHWU) Ms. Usha Acharya gave greeting to the Nepali and worldwide workers. She stressed that NTUC has 12 informal sectors union and the most of the workers from such sectors are unpaid minimum wage as determined by the government.

Similarly, President of Nepal Carpet Workers Union (NCWU) Bro Sabirman B.K. widely criticized the recent government. He urged government to implement the act and laws of the government and stop spreading only hopes and commitments.

Accordingly, advisor of Nepal Transport Employers Bro. Bijay Swar expressed grateful to NTUC as being the first mentor towards career of union. He also told that it would more appropriate if he would have been invited as a workers representatives.

Furthermore, General Secretary of South Asian Regional Trade Union Council Bro. Laxman Bahadur Basnet provided the emergence and importance of social security act. He also focused upon the benefits it will spree upon the workers from informal sectors. "Government of Nepal is not strongly implementing the act and laws, the fear of social security act failure has become a concern", he added.

Likewise, President of NC Kathmandu district, Mr. Krishna Sabuj Baniya provided regards to the workers on the auspicious day. He also congratulated Nepali Trade Union Congress for taking the issues of labour seriously inside and outside the nation. He said that NC Kathmandu will always pair hands with NTUC for the prosperity of Labour.

Accordingly, NC spokesperson Mr. Bishwa Prakash Sharma vouched for the hard work of Nepali workers. The life of Nepali workers are miserable, more than 3 dozen workers have dead during the construction building in Qatar stadium, government of Nepal have to create employment inside the country. This is the day in which workers are united instead of leader; workers are the people who attribute sweat, blood for the prosperity of nation, he summarized.

In addition, the chief guest of the program, former general secretary of NC Mr. Prakash Man Singh equivocal the activities of government. He said that this kind of weak mechanism can alter the administrative practice of federalism. "Government of Nepal has deluded all tactics such a improvement of transport syndicate system, ending corruption and also spending only 30% of its total budget" he echoed.

At last, Chairman of the program Bro Pushkar Acharya appreciated the workers for making the rally and the session successful. He also stick around the time and said that there are programs in which past president Laxman Bahadur Basnet, Khila Nath Dahal are to be honored in JTUCC. He also criticized government only for the advertising rather than strongly implementing the laws related to labours.