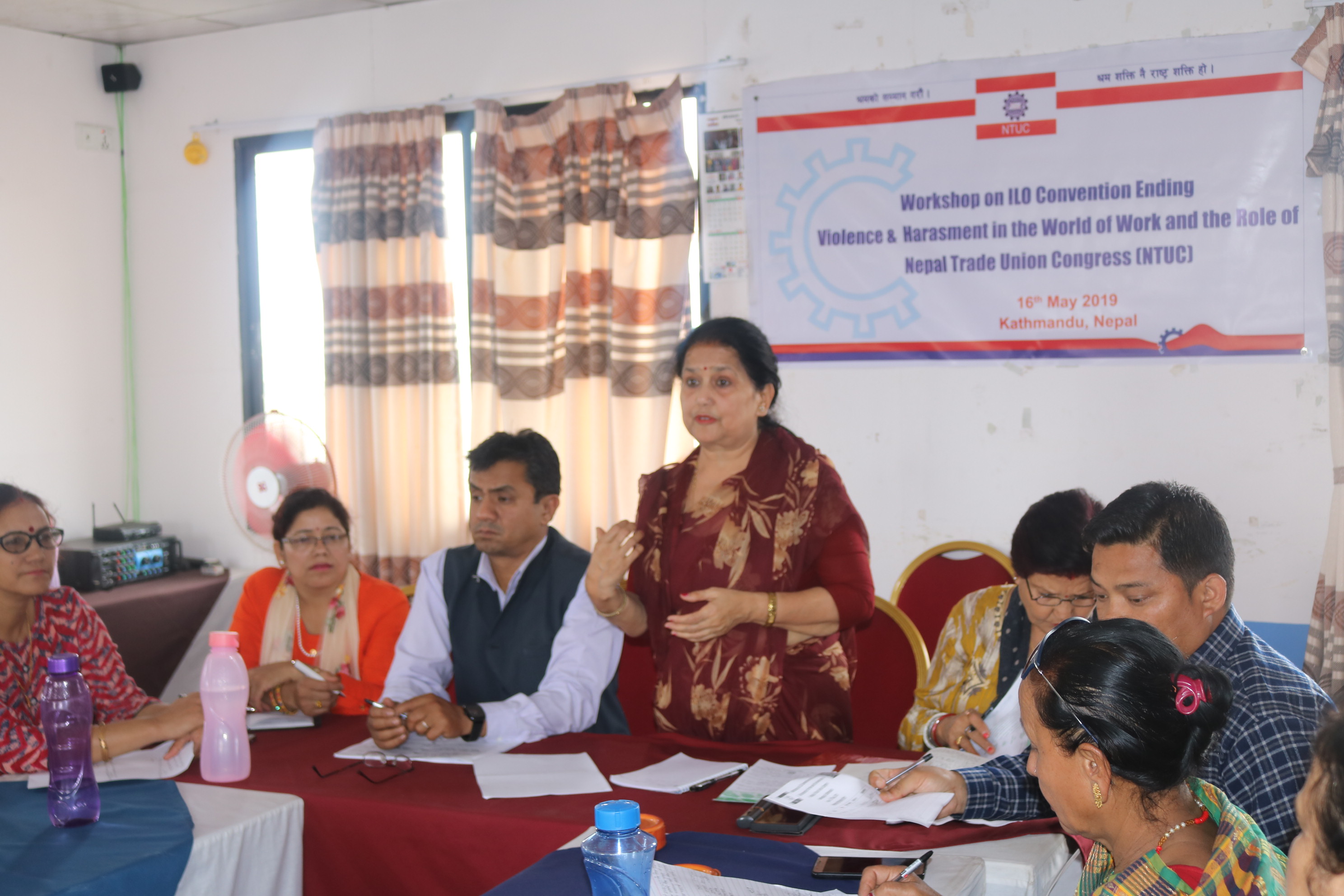 The main objective of workshop was to discuss about Nepal Trade Union Congress role in the proposed ILO Convention ending violence and harassment in the world of work. International Labour Organization drafted the convention regarding the eradication of gender discrimination in every organization, institution, industry and workplace Thus, the paper was drafted and was revised according to the feedback and suggestions from country's employers organization,, trade unions and government. Now that the paper is in final version and in the process to amend in the upcoming ILC convention, Sis Sudha Dahal and Sis Aasha Singh Rathor will take part and give the final remarks on it.

Meantime, Women vice president of Financial Institute Employees Union (FIEUN) sis Bandana Sharma gave suggestions about the paper. She argues that government of Nepal has not looked the issues in the paper seriously. There are many conflicts and errors in the paragraphs but our government has not raised any disaggrements. Also, Geeta Shrestha, women vice president of NETWON also raised concern that it would be better if the invitees of the program who are attending the Srilankan seminar took the feedbacks and issues of the affiliates union and compile a draft paper to present in the program.

The speakers Ramila Shrestha, Radhika Chalise Sabina Luintel all raised the issues of gender violence and the present issues in the workplace. They also criticized that the rules and policy itself has not restricted the discard of gender violence in the country like Nepal.

Sis Radhika Kuinkel stressed the issues of participation of women. She told that "we still have not developed the culture of mutual respect within ourselves; we backbite and derail the main focus of women problems." Also, sis Aasha Singh Rathor applauded the sisters that are still making to the organization and allocating the time for household activities as well. She further illustrated that "we have been able to implement more than 33% of women participation in NTUC leadership level and request all participants to maximize this reservation."

Likewise, former president of NTUC rupendehi district Bro. Kaji Man Shrestha pledged that the newly elected and the bypassing leaders must be united for the cause of labour movement. And, NTUC General Secretary Bro Yogendra Kumar Kunwar pledged the leaders to function the women committee effectively. He also said that women still lag participation in the programs and due to which their voices are not raised.

Chief Guest of the program Bro Tejendra Jung Karki briefly explained the tentative timeline and guidelines of NTUC Youth and Women Committee Convention. He vouched every leader to make this convention efficient.

Finally, Chairperson of the program Sis Sudha Dhal vouched that women must be competent and challenge man for the executive leadership role. She also quoted that we are left behind and are systematically biased. Therefore, we must have to make ourselves capable and eligible for the role.

The program was facilitated by NTUC women committee secretary Sis Kabita Aryal. There were more than 50 participants and which continue from 11:00 am to 4:00 pm. Government of Nepal has already agreed the proposed ILO Convention.